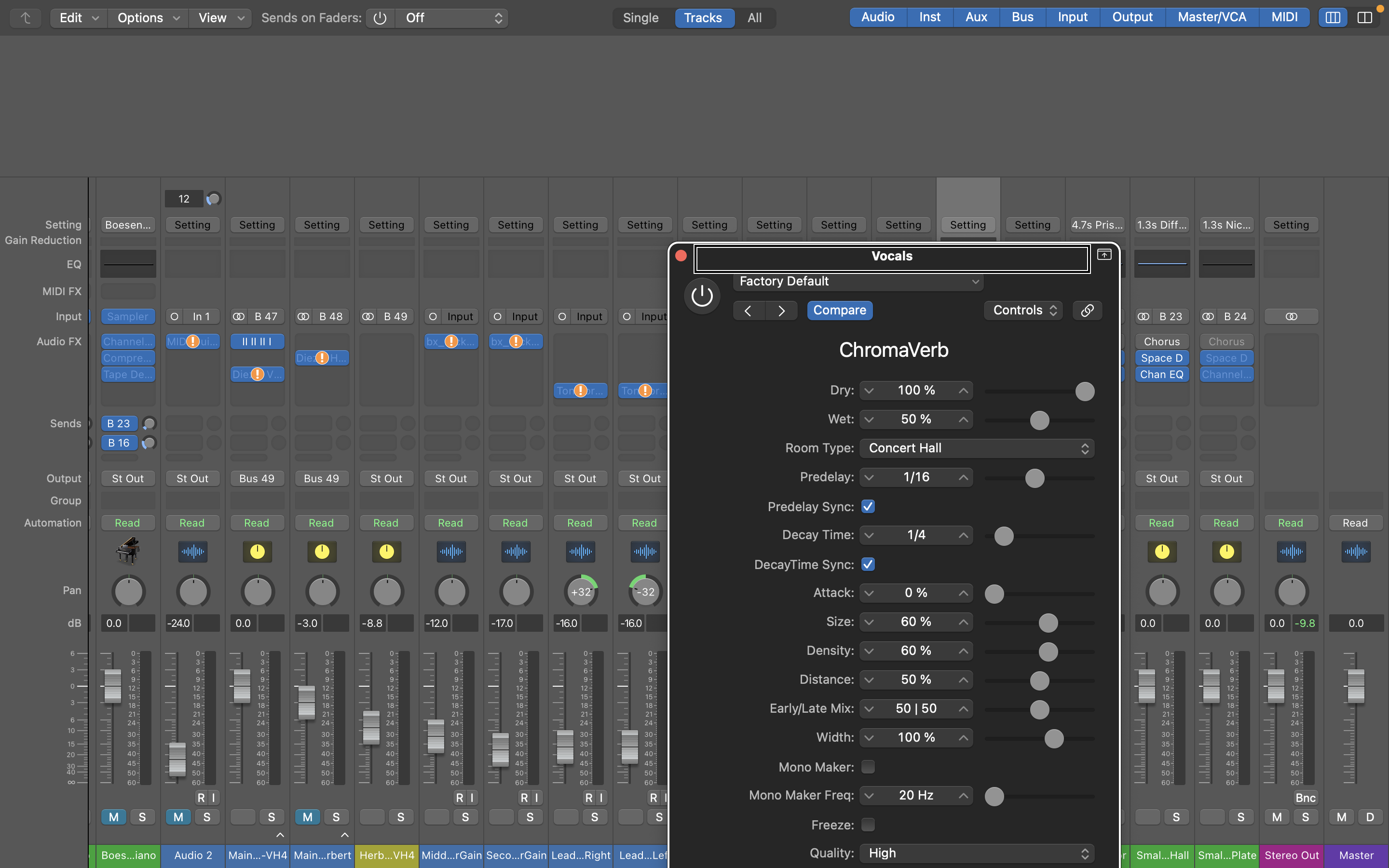 Posted in effects, Logic, and Uncategorized

Ever wondered where to begin to get a professional reverb on the tracks you are working on in Apple’s Logic Pro? Well in this tutorial for blind Logic Pro users, we’ll be covering ChromaVerb and Space Designer, the two flagship reverb plug ins which are included in Logic; and show how to use them with VoiceOver, the screen reader built into MacOS. We’ll cover the different types of reverb (plates, halls, chambers and rooms), and the parameters such as decay, pre-delay, EQ filters and how to get the right blend of reverb with the source for your mix.
If you find tutorials like these helpful, drop me a line or tag LogicDotBand on twitter or Facebook and let us know. If you received any value from these tutorials, share some value back with a one time donation. There is also the option for ongoing “Patreon” style subscription donations, as well. Also if you’d like to go deeper on any of these topics book some one on one training.

ChromaVerb and Space Designer are reverbs that rival some paid options out there. They even have features like being able to sync the decay and pre-delay to the project tempo, which are found in few paid plug ins. These awesome sounding reverbs are an even more excellent value as they are included in Logic Pro. To get started with these, the first thing you may want to do is dial in the mix of the reverb. These two plug ins have a separate wet and dry parameter instead of a single mix parameter. If you have the reverb directly on a track, you will most likely want to leave the dry at 100% or 0db, and use the wet parameter value to adjust how much of the reverb you hear. Another cool thing about these reverbs, when you instantiate them on an Aux/Bus, they automatically set the dry parameter all the way down. This is because when using it on a Aux/Bus, you will want to use the send level to adjust the blend of the reverb with the source track. If you aren’t familiar with Aux, Sends, and Busses, then grab the free “Getting Started With Logic” course as there is a module on this topic included.
Next up, we’ll tackle the different types of reverbs. The main ones we’ll focus on here are plates, which is based on a mechanical device, and halls, chambers, and rooms, which are all based on physical locations of some sort.
Once you select your reverb type, next we want to look at the pre-delay and decay time. The pre-delay is just that, a delay before the reverb. As a result this will adjust when the reverb starts and can aid in providing some clarity with the reverb.
Decay time is the opposite of the pre-delay, where that sets how long before the reverb starts, decay sets how long it takes for the reverb to end. The combination of these two help the reverb blend into the track it’s being used in.
The final parameters we’ll look at is the low cut and high cut filters. If you have seen the EQ or Delay tutorials, then you will be somewhat familiar with these already. The low cut helps remove a lot of mud and low end rumble that generally doesn’t sound good in a reverb. The high cut is it’s counterpart cleaning up the high end of the reverb from sizzle and harshness. If you are using a reverb that doesn’t have EQ filters built in, you can always put an EQ before or after the reverb.
Space Designer has a lot more parameters than Chromaverb, but the same parameters in both will help get you started. Want to know the difference between the two flag ship reverbs? Then check out the tutorial for the explanation and for sound examples of all the parameters we discussed here.